Skip to content
You are here
Home > Survival Skills > Tie down a tarp to make an emergency shelter secure, safe

Tarp shelters can make a rainy campout much more bearable. In some emergencies, a tarp might save your life. Here are a few tips for making your tarp shelter more secure.

This simple A Frame tarp shelter is set up between two anchor points.

I hiked the 225-mile John Muir trail and completed a two-week southern loop of Yellowstone using the same piece of plastic visqueen as my only shelter. At the time, I was in my early 20s, just out of college, broke and trying to backpack long distances. My gear choices were directly related to my financial resources! (See survival tents)

Today, even though I have several backpacking tents, I still frequently use a tarp. In some cases, such as making certain snow shelters, or when you need to go light, a tarp may be the best shelter choice.

Tarp shelters are only limited by your imagination. Regardless of how you’re rigging yours, here are a few proven tips I’ve learned that can help make your shelter more secure.

This timber hitch knot is effective for securing one end of a tarp. The harder it’s pulled the more secure it gets. The knot is easy to untie.

1 – Start by learning a few simple knots, and practice tying them until you can produce an effective  knot in the dark or in bad weather. Chances are, that’s when you’ll most desperately need a quick emergency shelter, and you don’t want to be fumbling around.

A very simple, effective shelter is the A Frame.  Basically, the A Frame is  a line set up between two anchor points, with a tarp draped over it. An A Frame looks like a pup tent without ends.

These two knots will help you quickly set up a line between two anchor points.

Use a timber hitch first to secure one end of your line. This friction knot is simple to tie, and the more pressure is put on the knot,  the tighter it gets. 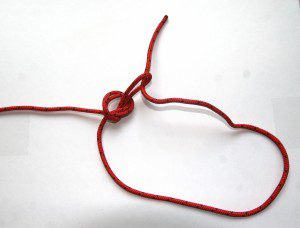 This version of a trucker hitch allows the center line to be tightened by pulling on the tag end.

2 – Choose your campsite with an eye toward pitching a tarp. Try to have at least one solid object to secure one end. Always check for dead or fallen branches above and around any potential tarp site! Ideally, the ground should be slightly slanted so rain will drain easily. You may have to dig trenches around the sides to aid drainage.

3 – Insert a small stick in a rope loop in the grommet.

The concept is simple. The line is threaded, double, through a grommet, and a stick is placed in the loop. This anchors the tarp at a particular point on the line, while at the same time allowing the rope to move and be tightened. The tarp can be evenly tightened and the stick/rope combination protects the grommets from being torn in heavy winds.

During one windy, rainy campout, we used this technique (I learned it  at a Peter Kummerfeldt  survival seminar) to secure a tarp over the

Use a small stick to help secure the main center line. When pressure is put on one end, the line will tighten evenly, keeping the grommets from being torn out.

cooking area and gear. The rain continued for two days, and the sticks and paracord kept the tarp taut and effective so the water drained off easily. In another instance, during a two-week campout, I left a tarp set up in this manner for 14 days. Other than the paracord stretching some, there were no problems at all.

Aluminum tent stakes weigh virtually nothing. Combined with a tarp, and about 25 feet of paracord, the items can be made into an effective emergency shelter.

4 – Take along aluminum tent stakes. They weigh hardly anything, and can be used to stake down the corners and sides of the tarp. While I typically use rocks to anchor the corner of a tarp, sometimes there aren’t any handy.

5 – Don’t forget your walking stick, ski poles or trekking poles as potential  supports for a tarp shelter. In a pinch, you can use a pair of these sticks or poles to make an A-frame shelter.

6 – Keep your corner grommets from tearing out. This tip came from my friend Bob Patterson, of Mankato, MN. Bob is a retired firefighter, and knots, ropes and lashings are his thing.

The idea here is to disperse the stress and strain, so the corner grommet doesn’t get torn out by a blast of wind or prolonged gusts. Basically, you thread a piece of paracord between the three grommets on a corner. The loops that result are threaded through a carabiner.  With the stress dispersed between three grommets, there is not an instance when the full brunt of a gust can be focused on one grommet. Check out the video.

All these tips can contribute to an efficient shelter that can get you out of the nasty weather quickly.  That hasty tarp shelter may be what tips the scales in favor of your survival.

COVID-19 Coronavirus Pandemic | So Much Worse Than You Know…

Survival in a can: A novel attempt