When it comes to hunting camp cuisine, fast and simple  is good. This philosophy also applies to feeding teenagers, especially when they’re athletes and absolutely starving after a day at school followed by a hard workout. This recipe for venison steak  covers both bases.

Even if I wanted to quit elk

– which I don’t – I’d still have to come up with venison. My family was raised on wild game meats

, and there are some dishes that just don’t translate as well when you use domestic stuff.

Chicken fried elk or deer steak is one of those family favorites. The “chicken fried” part of the name comes from, I’m assuming, the idea of frying a steak like chicken. Variations of this dish are a mainstay in many southern states when it comes to converting a tougher piece of meat into gourmet eating. 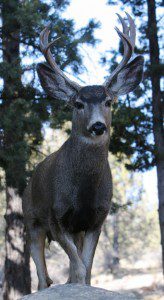 A major benefit of deer and elk hunting is the superb meat. (Pantenburg photo)

My daughter requests chicken fried steak it at least once a week, generally after a long run. The recipe is a perpetual favorite at hunting camp, where the backstrap from a deer or elk  is traditionally dedicated to an all-you-can-eat venison meal.

in a cast iron Dutch oven

. That is generally what I use to cook this dish with, since my off grid cooking gear stays set up outside year round.

If there is time, I will  marinade the meat in a combination of milk, an egg and various seasonings as the mood strikes me. I let the meat soak for half an hour to an hour, or whatever time permits. If you have a prime cut of backstrap or a tenderloin, no marinading is necessary.

Related:  How to Stay Cool During a Power Outage

The traditional side dishes are mashed potatoes and gravy, blackeyed peas

. And if that’s not southern

comfort food, I don’t know what is!

1 to 2 pounds of venison

, tenderized with a meat hammer. Marinade if desired.

1 to 2 cups of all-purpose flour, salt and pepper

Slice the meat to pieces about one inch thick. Pound the meat flat  with a meat hammer, put in the marinade in a gallon Ziplock bag, and place in the refrigerator. If I think of it, I’ll periodically remove the meat to knead the marinade into the meat. This probably is not necessary, but little things combine to make a great dish.

Put the flour in a paper bag. (It has to be paper, according to my mother-in-law, Ethel Pickens. Ethel, from Vicksburg, MS, makes the best southern fried chicken and chicken fried steak in the world. She says a plastic bag will make the breading gummy and sticky.)

Remove the meat from the marinade, put in the paper bag with the flour, and shake it until the meat is thoroughly coated. Put on a plate. Put the meat on the plate in the freezer for about 15 minutes. This will make the breading “set.”

Put about one inch of oil in the bottom of the Dutch oven and heat until it’s hot. (You want the oil to be heated to the point where there is an immediate sizzling effect when you put the meat in.)

Fry on the first side until the blood comes to the surface, then quickly turn. The bottom should be browned, and keep frying the meat on medium heat until it is done to your satisfaction.

Related:  How to keep your tarp corner grommets from tearing out

Make a lot. This will be very popular.