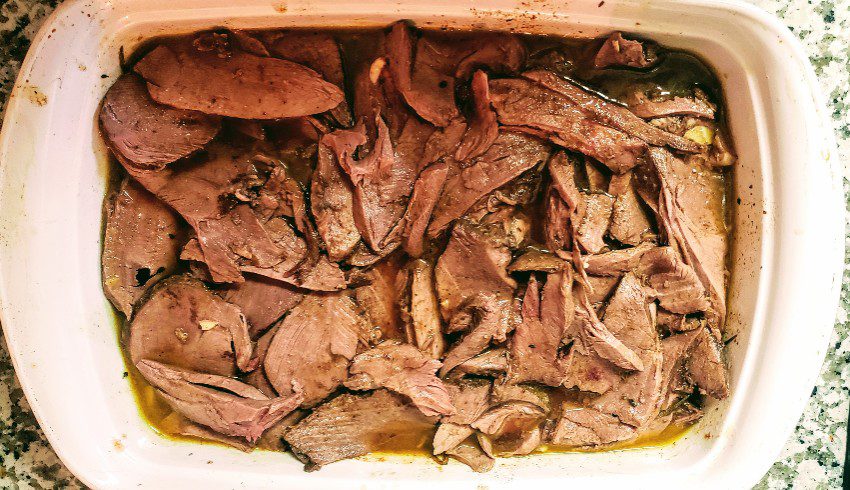 Serve Sunday Dinner with Venison from an Electric Roaster

Every year my husband, Leon Pantenburg, brings home something wild to cook. Sometimes he’s blessed with a good hunt or a friend will donates his or her kill.  Some years we eat venison, goose, duck, wild pork and even alligator.

For the record, I’m not a fan of cutting up creatures in the kitchen that tend to leave behind a spot of blood or random strand of fur. I prefer that part is handled outside. But, our kitchen does have terrific knives, so after cleaning and boning out game, the easy part is slicing and dicing for a wild game recipe.

SHOULD WE SMOKE OR ROAST THE VENISON
There’s nothing like a slowly smoked venison roast, goose or duck. But, that’s a big commitment of time and today is not that day. So, I dragged out the electric roaster and started gathering my spices. The rest was pretty easy.

The key to cooking any venison under any method is to keep it from drying out. It’s got precious little fat and it’s tricky to keep it moist and tender. This particular day I had a small, 8 – 9 pound hindquarter from a younger doe. “That’s good eating”, as they say around here.

BRINING YOUR GAME
We usually soak game meat in brine (chilled, salted water) for 2 – 3 days and thoroughly rinse before cooking. Most of the time we freeze the meat for future gatherings. There’s a lot of debate about freezing game that has been salted, but that’s the most convenient process for us. I prefer it butchered and brined so I can grab it from the freezer and go.

This time while Leon was butchering his deer, I asked him to save a fresh hindquarter for dinner the next night.

STEP ONE – MARINATING
I started out by marinating the entire hindquarter for a full day with the recipe below. I made a nice bed of tin foil in the roasting pan, curling up the edges around the meat about 3/4 inch to hold the liquid, and I turned it a couple times. The marinade has plenty of ingredients (see below) that get pulled in and break down the toughness.

When finished marinating, I pulled the tin foil out from the pan and let the marinade flow into the bottom, and laid the meat on a big cutting board for the next steps.

STEP TWO – LAYER UP
I then slathered the meat with olive oil and rubbed in the herbs and spices. I make a dozen 1/2 inch tiny slits all over with a sharp knife and stuff with garlic cloves. I dropped big cuts of carrots and onions into the marinade at the bottom of the roasting pan with a slightly elevated roasting rack. With the hindquarter sitting on top of the rack, I lay on fresh sprigs of rosemary and thyme.

The final step is to cover the entire hindquarter with a generous amount of fatty bacon, tucking it around all the edges until no meat is showing. The bacon drippings and olive oil with spices will seep into the garlicky slits and mix with the marinade, steaming the carrots and onions.

STEP THREE – ROAST THE VENISON
Next, you cover the meat with the lid and set the roaster at 225 degrees for one hour and then 200 for another 1.5 hours. Check the meat after two hours to see how it’s doing. Make sure you use a meat thermometer and stick it deep next to the bone. When the meat is at least 145 degrees in the middle, unplug it and uncover it, letting it rest until it’s room temperature. It will cook a few more degrees over the next 20 minutes. 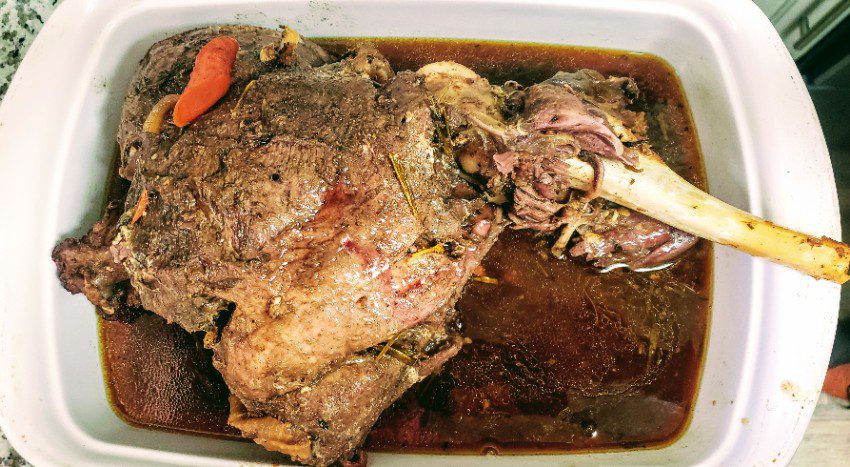 IS IT DONE?
I like my venison barely well done, but not overcooked, just when the center of the slice is light brown but not pink. (For medium rare, you’ll want 145 degrees) The broth from venison has a slightly pinkish color anyway as natural game, but as long as the juice isn’t red, you’re good.

After its rested, lift the hind quarter out of the roaster and allow the drippings to stay in the pan. Lay the quarter on a big cutting board and use a sharp knife to carve it into thin slices so it isn’t too chewy or touch. Pile up the venison slices in a large casserole serving dish.

Gently spoon out the carrots and onions from the bottom of the pan and put in a separate bowl. Take the drippings from your pan and pour over the venison until covered.

Mash a few yukon potatoes and call it a great meal!

RECIPE FOR SLOW ROASTED VENISON HINDQUARTER
Brine the venison in salty water for 2 – 3 days, changing the brine daily. Rinse thoroughly and dry with paper towels.
Marinate the hindquarter for 24 hours in the refrigerator, turning a few times, and removing it an hour before cooking to warm up to room temperature before roasting.

Related:  How to Prepare an Emergency Plan for Your Family When You’re Away from Home

Cut 5 lbs of carrots and 2 large onions into generous portions and create a bed of vegetables for the roast. Lay a rack on top of the vegetables, positioned approx 1 inch off the bottom of the pan.
Cut 1/2 inch slits all over the meat and stuff with garlic.

Place the entire hindquarter on top of the roasting rack and add sprigs of rosemary and thyme across the top.
Drape the bacon across the meat, covering every inch, and wrapping it around toward the bottom.

Cut carrots and onions and place in the bottom of the roaster under the rack. 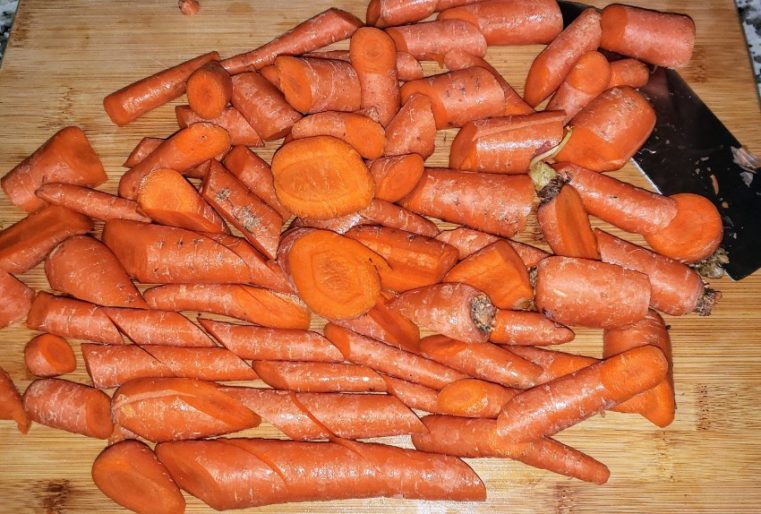 Lay the marinated and spiced hindquarter on the rack and cover with fresh herbs & pepper. Cut tiny 1/2 inch slits in the meat with a sharp knife and stuff in some garlic cloves. 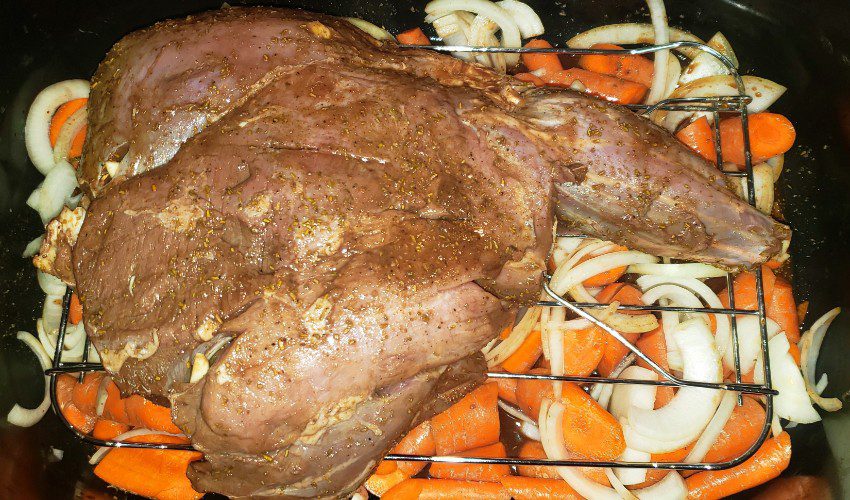 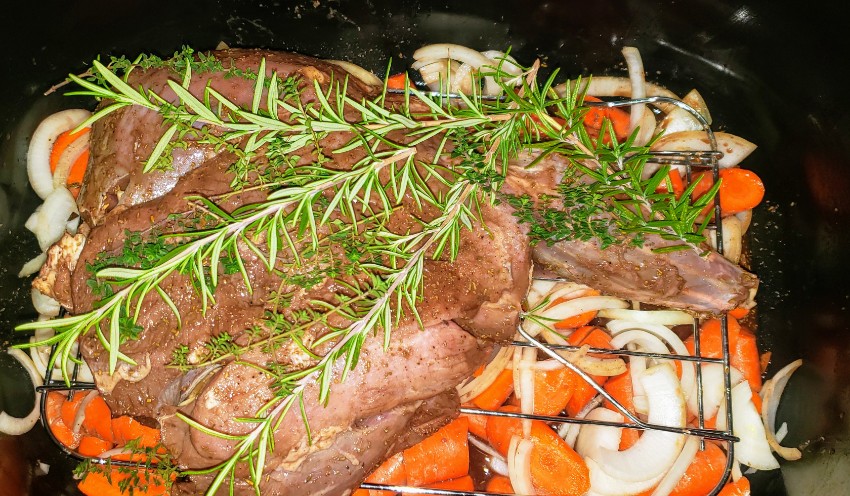 Drape fatty bacon across the top and around the sides of the meat, tucking it in.

Baste the meat with the juices every 45 minutes. 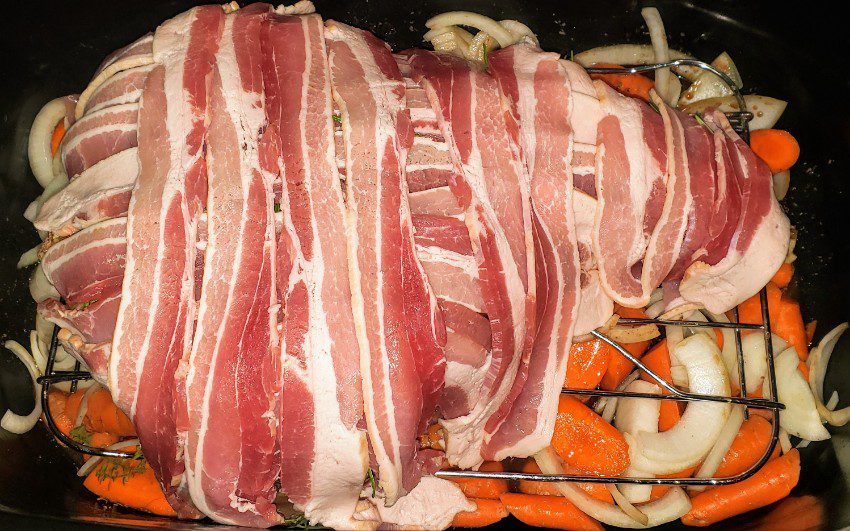 ROAST AT 200 DEGREES UNTIL THE INTERNAL TEMPERATURE IS 160 DEGREES
Roast the meat at 250 degrees for one hour and then turn it down to 200 for the remainder of the time. Baste it with its roasting juices every 45 minutes. Use a meat thermometer and check every 45 minutes to ensure it cooks to a minimum 145 degrees, and not past 160 degrees . Be sure to not overcook the venison. Unplug the roaster and let the meat rest before slicing, approximately 30 – 40 minutes.

The Truth About Privacy Online and Beyond In The Modern Age

Today is also the birthday of Congressman Richard Henry Lee