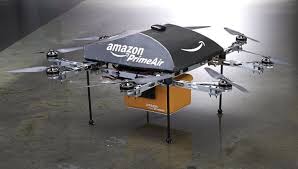 We have Amazon.com drones in our future.

We all use Amazon’s delivery service for everything from rechargeable batteries to art books to beef jerky, and so I was quite taken aback when CEO Jeff Bezos showcased a drone delivery system called Prime Air on 60 Minutes. The idea is that packages below five pounds could be delivered straight from Amazon distribution centers to customers within 30 minutes using drones.

As many have observed, it probably wasn’t a coincidence that the 60 Minutes segment aired on Sunday ahead of Cyber Monday, the busiest online shopping day of the year — a good time for Amazon to be in the news.

Since Sunday’s show, media coverage of Bezo’s plan has overwhelmingly focused on the technical and logistical aspects of Prime Air.

For example, will the FAA be okay with all these drones flying around? Are they safe enough to fly around crowded cities and neighborhoods? And can Amazon economically operate what would be a presumably large fleet of drones?

And Amazon’s not the only one in this game. The Verge reported that United Parcel Service is researching delivery drones, too.

Additionally, we learned this week that Google acquired seven robotics companies, which, according to a New York Times report, “are capable of creating technologies needed to build a mobile, dexterous robot.”

Remember, Google has been experimenting with driverless cars, and is actually running a same-day delivery service in California, so it is definitely interested in human less logistics, for lack of a better term.

I find it a bit disturbing how little conversation there is about the possible negatives of replacing humans with machines for things like delivering packages.

Here’s a passage from the Times’ article that actually startled me a bit:

A realistic case, according to several specialists, would be automating portions of an existing supply chain that stretches from a factory floor to the companies that ship and deliver goods to a consumer’s doorstep.

Related:  Vegetable Shortage in Great Britain: Time to Get Gardening

“The opportunity is massive,” said Andrew McAfee, a principal research scientist at the M.I.T. Center for Digital Business. “There are still people who walk around in factories and pick things up in distribution centers and work in the back rooms of grocery stores.”

In terms of the massive opportunity, it certainly isn’t for the middle class. Mr. McAfee himself discussed this issue in a June piece from the M.I.T. Technology Review, fittingly titled “How Technology Destroys Jobs”:

New technologies are “encroaching into human skills in a way that is completely unprecedented,” McAfee says, and many middle-class jobs are right in the bull’s-eye; even relatively high-skill work in education, medicine, and law is affected. “The middle seems to be going away,” he adds. “The top and bottom are clearly getting farther apart.” While technology might be only one factor, says McAfee, it has been an “underappreciated” one, and it is likely to become increasingly significant.

And what about the people who make a living in the back rooms of grocery stores? Should we simply write them off as left behind because machines are more productive?

Here’s more from the Times’ on Google’s Andy Rubin, the engineer behind the Android operating system who is now heading up the company’s robotics effort:

“I have a history of making my hobbies into a career,” Mr. Rubin said in a telephone interview. “This is the world’s greatest job. Being an engineer and a tinkerer, you start thinking about what you would want to build for yourself.”

He used the example of a windshield wiper that has enough “intelligence” to operate when it rains, without human intervention, as a model for the kind of systems he is trying to create. That is consistent with a vision put forward by the Google co-founder Larry Page, who has argued that technology should be deployed wherever possible to free humans from drudgery and repetitive tasks.

Related:  How to Grow Herbs and Veggies on your Fire Escape

Well, there are a lot of people who earn honest livings from drudgery and repetitive tasks.

There’s no standing in the way of technological advancement. But we shouldn’t gloss over the inevitable friction that comes with evolution, especially since in this case, the end result looks like a class war.

The victims of this relentless innovation in automation will be, at least initially, people who work in factories, for delivery services, and in service industries like retail — not the programmers and entrepreneurs who reap the economic benefits of increased productivity.

The good news is that a truly automated world still seems pretty far off.

But that’s exactly why we should be talking about it now.

Amount Of Protein You Need

What to Do With Leftover Halloween Candy